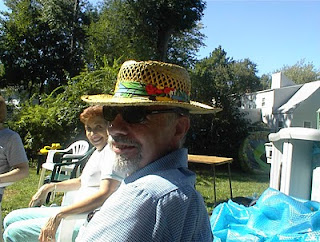 My Dad is doing well. He is not 100% but probably won't be for a while yet. But the prognosis is good. He remains in the hospital, but is no longer in ICU.

He is getting some of his old personality back and his odd sense of humor, so things are looking good. Thanks again to all the prayer warriors out there.

I just received this email from the son of a longtime former volunteer, Jim Fitzgerald.

'My dad (Jim) was admitted to the hospital today. They think he had a mini stroke and is being held for observation. Please alert your prayer chain. Thanks. Keenan Fitzgerald' -

Former volunteer Jean Fitzgerald updates the story:
Thank you for the prayers. Jim did suffer a mini -stroke. The CT scan showed bleeding in the brain. However, it is very small. He is in the ICU because they want to monitor him very closely. They will be doing more tests to determine if the bleeding stopped or is ongoing. He seems okay but has a hard time talking.(If you can believe that!!) He can't put thoughts together and express them. He knows what's going on and understands what you say. Depending on the tests, he may be home in two or three days. We really appreciate your prayers. Love you all, Jean
Posted by Dean Gavaris at 10:57 PM