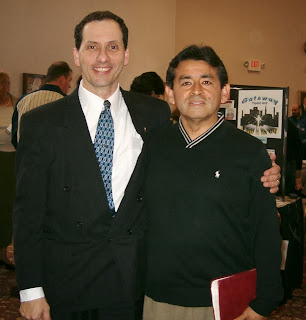 Washington, DC (LifeNews.com) -- Doctors removed Terri Schiavo's feeding tube on Wednesday afternoon. Although Terri is not hooked up to any artificial breathing apparatus, the feeding tube provided her with food and water that allowed her to remain alive.

Terri's father Bob Schindler confirmed that the tube had been removed and attorneys for her husband, Michael, said doctors have told them it will take anywhere from a week to 10 days for her to die.

"I just haven't given up hope yet," Mary Schindler told reporters outside the hospice.

She watched along with Micahel Schiavo, who demanded that Terri's live be ended, and was reportedly "visibly shaken" and distraught afterwards.

Terri's parents are clinging to an 11th-hour meeting with Governor Jeb Bush (R-FL). He promised to have his legal team investigate any possibility whereby he could intervene on Terri's behalf.

George Felos, Michael's attorney and an assisted suicide advocate, claimed the Schindlers were "in denial" about his claims that Terri wouldn't have wanted to be kept alive.

"We're talking about a woman who is not terminally ill, who's not hooked up to machines, who is going to live a normal lifespan unless her food and water is taken away," Smith explained.

Smith interviewed neurologists and others for his landmark euthanasia book Forced Exit and said that Terri will die a painful, "terrible" death.

"People can go into seizures. Their lips can crack. They can vomit. The hands mottle and turn cold, because all the water goes in towards the heart."

Pro-life groups say the case of Terri Schiavo is not new.

Burke Balch, the director of medical ethics at National Right to Life, tells LifeNews.com that Terri's situation signifies a clear trend towards denying basic medical care to the severely disabled.

"For about two decades, the law in virtually every state has decreed that 'surrogates'" may authorize denial of treatment to those who cannot speak for themselves," Balch said. "Consequently, vulnerable people with impaired consciousness have routinely been denied life-saving treatment, food and fluids until they die."

"Perhaps not until the publicity about this case have large numbers of Americans recognized how deep and widespread is the commitment to the "quality of life" ethic among doctors, hospitals, and the courts," Balch added.

Rodriguez was interviewed by authorities last week, but has since declined to speak with investigators. He has said through his attorney that he is innocent.

“I CERTAINLY HATE to be discouraging to the family or anyone, but it looks to me now that it’s more of a recovery mission than a rescue,” Grand Forks County Sheriff Dan Hill said.
In an interview with The Associated Press, Hill also revealed that searchers found a shoe belonging to the University of North Dakota student near the Red Lake River after she disappeared. Sjodin (pronounced sha DEEN) was last heard from Nov. 22, calling her boyfriend on a cellphone from the parking lot of a Grand Forks mall where she worked at a Victoria’s Secret.
The shoe was identified by a college roommate of Sjodin, 22. It is the only piece of clothing recovered so far, Hill said.
An affidavit unsealed later Tuesday had only one new piece of information: Rodriguez’s account of his whereabouts at the time Sjodin disappeared. According to the affidavit, Rodriguez told police he was watching a movie, “Once Upon a Time in Mexico” at about 7 p.m. that night. Police said the movie wasn’t being shown at any theater near the mall that day.
Alfonso Rodriguez Jr.
The preliminary DNA match would be the most significant break yet in the attempt by authorities to tie convicted rapist Alfonso Rodriguez Jr. to Sjodin’s disappearance. Hill said investigators tested blood from Rodriguez’s car against DNA taken from Sjodin’s toothbrush. Hill described the blood in the car as a small amount.
Hill also confirmed a media report that the interior of Rodriguez’s car and its trunk had been extensively cleaned before his arrest.
Rodriguez, 50, has been charged with Sjodin’s kidnapping. He has said through his attorney that he is innocent.
The Associated Press reported Monday that a knife was discovered in the trunk of Rodriguez’s car, and later reported that a sheath found near Sjodin’s car matched the knife.

• Write a letter to the editor

• Read letters to the editor


Sjodin’s father said Monday he was dismayed to find that police recovered a knife from Rodriguez’s car. But given his criminal past, he said he was not surprised.
“You know what? It’s probably true,” Allan Sjodin said. “That’s his modus operandi.”
Rodriguez has a history of attempted kidnapping with adult women, and has used a weapon in at least one assault. Rodriguez was released from a Minnesota prison in May after serving 23 years for an attempted abduction in 1979.

© 2003 Associated Press. All rights reserved. This material may not be published, broadcast, rewritten or redistributed.

You can write to former Mayor Bost at:

NOTE: You can write to Mrs. Bost at:

Former Irvington Mayor Sara Bost reported to a federal prison camp in West Virginia yesterday after losing a bid to remain free while she appeals her sentence on corruption charges.

Bost arrived for a year-long stay at the women's minimum-security camp in Alderson, a prison official confirmed.


The town is a mountainside hamlet of barely 1,000 people in the southern part of the state, near the Virginia border. It's also 480 miles from the New Jersey township where Bost served two terms as mayor, before her once-rising political star crashed.

Bost will be assigned to a dormitory, fitted for a uniform and work at a camp job that probably will pay her no more than 40 cents an hour, officials said.

"All inmates are required to work," said Carla Wilson, a spokeswoman for the U.S. Bureau of Prisons. "Work is our most important program."

Alderson sits in the shadow of the Allegheny Mountains, with longer, colder, whiter winters than northern New Jersey. The town has been home to a federal women's prison for at least 60 years. The facility now houses 980 inmates, Wilson said.

Brick buildings line the campus, which, unlike higher-security prisons, has no fences. Inside, prisoners share rooms in their dormitories and can take educational courses or learn trades in the prison workshops.

The prison term was something of a surprise after Bost, 55, pleaded guilty in April to a single count of witness tampering. In return for her plea, prosecutors halted her trial and agreed to drop more serious charges alleging that Bost demanded and took payoffs from township contractors.

Prosecutors also said they would not object if Bost argued for probation at her September sentencing.

But U.S. District Judge Joseph Greenaway stunned lawyers and the defendant when he turned aside Bost's request and instead gave her the stiffest penalty he could for her crime under federal sentencing guidelines.

By ordering her to serve exactly 12 months, Greenaway ensured that Bost won't be released early. Inmates sentenced to a year or less cannot earn time off their term for good behavior. Greenaway also rebuffed a request by Bost last week to remain free on bail while her attorneys prepare to appeal his sentence. He told her to report to prison as scheduled.

The judge also ordered her to perform 150 hours of community service, pay a $2,000 fine and undergo two years of supervision after her release. Bost's attorneys have notified the 3rd U.S. Circuit Court of Appeals that they will challenge the sentence, but have not yet filed their arguments.

Defense attorney Alex Bowman confirmed in a telephone call yesterday that Bost had begun serving her term, then hung up.

Meanwhile, prosecutors said they were pleased that Bost's prison term has begun.

"It's Mrs. Bost's right to appeal her sentence, but she can do that while she begins serving it, too," said Michael Drewniak, spokesman for U.S. Attorney Christopher Christie.

Bost, an accountant, was accused of taking a $1,500 kickback from a paving contractor in 1999 and another $7,000 in bribes earlier from the developers of the sprawling Maple Gardens apartment complex.

The township's former business administrator, David Fuller, became a government witness and tape-recorded his conversations with Bost. FBI agents also videotaped her as she frisked Fuller and asked if he was wearing a wire. Bost denied any wrongdoing.

A former Essex County freeholder, Bost became the latest in a growing list of New Jersey public figures to trade their offices for a prison cell in the last two years.

More than two dozen have been indicted, convicted or sentenced on federal corruption charges during that span.

Email ThisBlogThis!Share to TwitterShare to FacebookShare to Pinterest
From Dean's friend Anne, who led him to Christ:

Yes, I'll certainly keep these requests in my prayers. I have one to add to your list regarding my sister, Sue Sheppard. First of all, praise that following her chemo treatment the cat scan revealed no sign of cancer in her abdominal area. The huge tumor is gone. However, she has a total of 20 spots on both lungs and one spot on her liver that they are watching. She is now being treated with Doxil, a drug that has been known to damage the heart. Sue called last night to report that they now want to do a repeat mammogram today because the test last week revealed something in her breast.

I visited Sue and Terry a week ago Sunday and heard her sing in the Messiah. How wonderful to again hear the affirmations, For Unto Us a Child is Born, And By His Stripes We Are Healed, I Know That My Redeemer Liveth, and the wonderful Hallelujah Chorus: King of kings, and Lord of lords, and He shall reign forever and ever. Hallelujah!

Please pray for healing for Sue of the cancer and freedom from any dangerous side effects of this new chemo treatment. Nothing is too difficult for God.

GRAND FORKS, N.D. (AP) � A Crookston, Minn. man has been arrested and is facing a kidnapping charge in the disappearance of Dru Sjodin, police said.

Rodriguez is being held at the Tri-County Correctional Center in Crookston, Minn., police said.

Dru Sjodin, of Pequot Lakes, Minn., has been missing since Nov. 22, when she left her job at the Columbia Mall in Grand Forks.

Police said a search for Sjodin is ongoing. Police said no further information will be released until a press briefing on Tuesday morning.