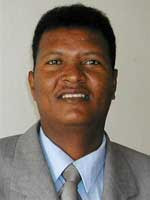 ... and consider this observation by a pastor in Wisconsin:

“We are too comfortable.

The sin which so easily entangles in America is comfort, apathy, and a perpetually high expectationfor convenience.

This hit home when I sat in Dunn Brother’s (a very, very comfortable coffee place) with a dear brother from Eretria.

This brother had just returned from suffering severe persecution in Eretria. Comfort was no entanglement there! Apathy? Relatively unknown. The expectation is not convenience but rather incarceration.

I want to stretch out further in faith, past convenience, and place myself in positions where I need to feel the greatness of His power.”

Dean’s note: After a call to Voice of the Martyr’s I learned that the religious prisoners in Eretria are often imprisoned in metal freight boxes stacked one on the other. This has been mentioned at http://news.bbc.co.uk/2/hi/africa/3663654.stm (see below)

Please pray for Girmay Ambaye (see above photo), using the prayer guide at the link below


Imprisonment:
On May 11, 2005 Evangelist Girmay Ambaye: was arrested by security police in Eritrea for witnessing about Christ to people on a city bus.


Reference to the metal containers used to incarcerate Christians:
http://news.bbc.co.uk/2/hi/africa/3663654.stm

Some background on the country:
http://www.wordiq.com/definition/Eritrea
at July 29, 2009 No comments:

Change You Can Believe In

The NY center called Gateway and we called Jackie. She is no longer 'up in the air' about whether to carry to term or not. She is not considering abortion but is open to counseling.

We referred her to a Christian pregnancy center in Shrewsbury, NJ (Solutions Pregnancy and Health Center)

Viola, age 26, has five children, including the child due in less than four months. She's currently incarcerated at the Mercer County Correction Center in Lambertville.

We visited her on July 10th and had the opportunity to share the gospel using the literature from EvanTell.

When asked the question from the booklet 'Is there anything keeping you from trusting Christ right now?' Viola said her 'bad language' and the 'anger in my heart'.

We explained that this was the reason Christ came. We can come to Him just as we are and trust Him not only for salvation but to live the life intended for us. Viola will consider the claims of Christ and we ask that you pray for her salvation.

The man President Obama has chosen to be his science czar once advocated a shocking approach to the "population crisis" feared by scientists at the time: namely, compulsory abortions in the U.S. and a "Planetary Regime" with the power to enforce human reproduction restrictions.

"There exists ample authority under which population growth could be regulated," wrote Obama appointee John Holdren, as reported by FrontPage Magazine. "It has been concluded that compulsory population-control laws, even including laws requiring compulsory abortion, could be sustained under the existing Constitution if the population crisis became sufficiently severe to endanger the society."

Holdren's comments, made in 1977, mirror the astonishing admission this week of U.S. Supreme Court Justice Ruth Bader Ginsburg, who said she was under the impression that legalizing abortion with the 1973 Roe. v. Wade case would eliminate undesirable members of the populace, or as she put it "populations that we don't want to have too many of."

In 1977, when many scientists were alarmed by predictions of harmful environmental effects of human population growth, Holdren teamed with Paul R. Ehrlich, author of "The Population Bomb," and his wife, Anne, to pen "Ecoscience: Population, Resources, Environment."

Holdren's book proposed multiple strategies to curb population growth, and, according to the quotes excerpted by FrontPage Magazine, advocated an international police force to ensure the strategies were carried out.

"Such a comprehensive Plenetary Regime could control the development

, administration, conservation, and distribution of all natural resources, renewable or nonrenewable," Holdren and the Ehrlichs reportedly wrote. "The Planetary Regime might be given responsibility for determining the optimum population for the world and for each region and for arbitrating various countries' shares

From an interview of Justice Ruth Bader Ginsburg

JUSTICE GINSBURG: Reproductive choice has to be straightened out. There will never be a woman of means without choice anymore. That just seems to me so obvious. The states that had changed their abortion laws before Roe [to make abortion legal] are not going to change back. So we have a policy that affects only poor women, and it can never be otherwise, and I don’t know why this hasn’t been said more often.

Q: Are you talking about the distances women have to travel because in parts of the country, abortion is essentially unavailable, because there are so few doctors and clinics that do the procedure? And also, the lack of Medicaid for abortions for poor women?

JUSTICE GINSBURG: Yes, the ruling about that surprised me. [Harris v. McRae — in 1980 the court upheld the Hyde Amendment, which forbids the use of Medicaid for abortions.]

Frankly I had thought that at the time Roe was decided, there was concern about population growth and particularly growth in populations that we don’t want to have too many of.

So that Roe was going to be then set up for Medicaid funding for abortion. Which some people felt would risk coercing women into having abortions when they didn’t really want them. But when the court decided McRae, the case came out the other way. And then I realized that my perception of it had been altogether wrong.

Justice Ginsburg refers to'growth in populations that we don't want to have too many of'. Who are these people ?