She just had knee surgery and is in much pain.

She will be on crutches and a cane for the next 6 weeks.

Deede is a faithful Tuesday volunteer and we will miss her greatly during her recovery.
at January 31, 2007 No comments:

There are two types of runaways: the regular runaway, who only stays away for a while but ultimately returns home and the habitual runaway, who constantly moves from one place to another - nomadic, lost, rarely finding a place to call home. Many runaways are youths that become entangled in the seedy world of drugs and prostitution. Irvington resident Tyamba Taylor was a runaway who became a human trafficking victim at the age of twelve.

"I was 12-13 years old at the time. I didn't start off as human trafficking [victim]. I was a habitual runaway. On that journey of being a runaway, I ended up in New York, and of course I had no place to stay and I happened to be staying with different people from time to time."

According to the Trafficking in Persons Report 2007, human trafficking victims often suffer physical and emotional abuse, rape, threats against self and family, document theft, and even death."

Taylor was an honor student, a responsible daughter and sister, until her childhood came to an abrupt end. She spoke about her experiences in an exclusive interview for the Gothic Times and as part of a university seminar on April 13. Taylor is a student at NJCU, and also works at the Student Union Buildings in the Campus Life office.
Her mother, Ingrid Johnson-Hayward, worked long hours as a nurse and Taylor stayed at home looking after her two younger brothers. She started to skip school and her grades dropped drastically.

"I met someone online and we met at a Laundromat. He asked me to go back to his house just to get a couple of things and when it was time to leave, you know, he didn't want me to leave," said Taylor.

"You want to leave, you can't leave," said the man that accosted Taylor.

She was forced into stripping and having sex for money in underground strip clubs. The money would go straight to her pimp. For a whole year, her life revolved around sex, drugs, and violence.

She never had the chance to leave because there would always be a pimp standing outside the door.

After being picked up by a "John", a term exclusively used on the streets to mean a man that solicits sex, she was driven to a dark empty road and raped. She saw a gas station with a pay phone and called her mom.

"I want to come home." She said tearfully into an answering machine.

She stayed in the restroom of the gas station for a few days until it was safe to come out, until the people that were after her were gone. She opened the door only to realize that her victimizers were still there and she ran. They chased her onto the roof of a building.

"If you want to get out then you have to jump off the roof. If you don't want to die, then give up," shouted the man who chased Taylor.

"If I tried to get away I would get beaten with hangers or any other objects. I was forced to come back at gun point."

Taylor spent her birthday and other holidays out in the streets with other girls selling their bodies for their pimp. Taylor began to lose hope of any escape.

Her mother had tracked down her location by tracing the phone number and reaching out to the Brooklyn police. Taylor's mother eventually contacted with the man who was holding Taylor and convinced him to release her daughter. The man that held Taylor didn't want trouble with the police so he sent her with some cash to meet her mother at a train station.

Taylor and her mother reunited that day. She promptly returned to school and she sought out counseling.

"I went to 5 different counselors. I stopped going. I didn't feel like it was helping me. I have trust issues. I have nightmares, emotional breakdowns, out bursts filled with anger," said Taylor.

It's been seven years, and she is still haunted by the trauma. She now uses her experience to help others. Along with her mother she is a part of the Covenant Project and Polaris Project. These programs provide shelter, food, and clothing for runaway victims. She has gone on numerous television shows to tell her story.

Taylor has a 3.5 GPA, and aspires to become a high school teacher. She and her mother are involved in projects that help mothers and daughters cope with their problems.

However, the horror still remains fresh in her mind.

"I would not dare to let my little brother walk to school. I drop off my brother to school every morning. Cause there could be someone that would just pick him up." said Taylor.

Tyamba's story will be on WCBS-TV News(Channel 2) this evening at 11:00pm.Jay Dow interviewed her and her mom, Ingrid. The piece concerns her 11 months away from home.

As you recall, we at Gateway prayed for Tee and her family. Her mom attended our 2004 Banquet and we trusted the Lord for her safe return.

The following year Tyamba and her mom attended our 2005 Banquet to say thanks.

Check out the Blog entries, photos, poster and brief video below.

Pray for Tyamba as she grows in Christ.

Pray that the WCBS piece would be accurate and speak to the needs of others in similar situations. Dean

Many thanks for all your prayers!

Tyamba (tee), age 14 , ran away from home last March. Her mom, Ingrid Hayward, came to our fall 2004 Banquet and shared the need for prayer for her daughter.

After months of searching, praying and leafleting, Ingrid located Tee in NY through a police trace of a cell phone call. Ingrid traveled to on her own, located Tee and brought her home! Ingrid had come to Gateway in 1994.

Subsequently she came to Christ and married. Tyamba made a commitment to Christ five years ago, but strayed away.

Tee has visited Gateway since her return and our female volunteers are ministering to her. Praise the Lord!

: Police are looking for a 14-year-old teenage girl who has been missing

Tyamba S. Lamie left home March 13, but police believe she may still be in the area, said Police Director Michael Damiano. Several police alerts have been issued to law enforcement

agencies since her mother reported her missing.

Lamie, an eighth-grader at the in , is black, 5-foot-3 and 170 pounds. She has black hair, brown eyes and a scar on her right forearm, according to the for Missing and Exploited Children. She also may go by the nickname, "Tee."

"I spoke to her today at the hospital. While there is excess fluid on her lungs, the doctors are saying that she should do well as she gets up and moves around. She is awaiting the results from the tumor they removed."

A prayer request from Anne, my dear sister in Christ:

"My friend, Michelle (wife of a prisoner) seems to be having the same symptoms--very painful.
Appreciate your prayers for Michelle, who is a dear Christian sister.

"Our sonographer and friend, Nancy Stabinski had seen a surgeon for his opinion on a recent cat scan which had shown mild enlarged lypmh nodes and the pet scan resulted mild activity of the nodes.

On Friday they did a mediastinalocopy biopsy and today (Saturday) I called to see how it all went yesterday. Her son said that she had a tumor and she was immediately operated on. A tumor (is)near her lung.

Please pray for Nancy. She, I know, was not expecting it to be as serious as it turned out, but to quote her from one of her latest emails to me "If it turns out to be a new lymphoma cancer just beginning I AM BELIEVING IN THE HEALING POWER OF CHRIST JESUS, BY HIS STRIPES, WE ARE HEALED. THANK YOU LORD FOR DYING ON THE CROSS FOR ME."

That says it all. Thanks for your prayers. I will update you when I know more."

Christine Guernara, a Gateway-Elizabeth volunteer counselor, fell and further injured a bad knee . She appreciates our prayers. She will be having knee surgery to remove cartilege from her knee in a few weeks but her prayer is that the surgery could be sooner. She is pretty much unable to move around as it is now.

Wednesday, January 17, 2007
"Hi Friends!
I need your prayers for healing of my left shoulder, which I suspect may be bursitis. I've had a mild problem with it for a couple of years, but it suddenly became quite painful a about two weeks ago and, although I have been trying to rest it and take anti-inflammatories, etc., it's only gotten worse!

"The ortho doc suspects "frozen shoulder," and is sending me for an MRI to rule out a tear.
He tells me that the treatment period is long, and will likely involve physical therapy. "

One of our volunteer counselors, Nancy Stabinski, is having a biopsy tomorrow - January 19th. Please keep her in your prayers. See writes:

I AM GOING FOR MY ENLARGED LYMPH NODE BIOPSY ON FRIDAY THE 19 AT 9:30 AM. I AM BELIEVING IT IS ONLY SOME TYPE OF INFLAMATION OR NOTHING AT ALL TO WORRY ABOUT. PLEASE KEEP ME IN YOUR PRAYERS. 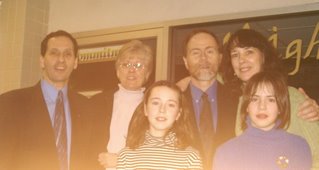 "Hi Friends!
I need your prayers for healing of my left shoulder, which I suspect may be bursitis. I've had a mild problem with it for a couple of years, but it suddenly became quite painful a about two weeks ago and, although I have been trying to rest it and take anti-inflammatories, etc., it's only gotten worse!


also posted at: http://gatewaypregnancycenter.blogspot.com/index.html
at January 18, 2007 No comments: