I can't wait until the 4th of July!

"We praise God with you and will pray for Adrianna. I do have a prayer request for Lighthouse (in Hawthorne). We are on the verge of a sorely-needed renovation of our rented facilities, but feel that God may be leading us to rent other facilities instead.

We are not on a main street and we are an extension of a church building,and can be difficult to find. I have sought advice from some other directors and would covet your prayers about this. 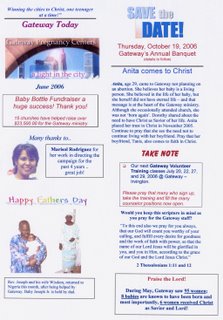 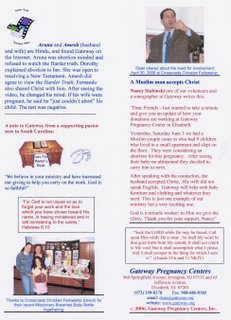 Email ThisBlogThis!Share to TwitterShare to FacebookShare to Pinterest
"Marriage is for White People"
..and other things your kids learn from their surroundings
by Randy Hicks, President of Georgia Family Council

***Rev. Michael Westbrook is Board Chairman of Gateway Pregnancy Center

A March 26 article in the Washington Post by Joy Jones created quite a stir with a comment by a 12-year-old male student in her career exploration class. When Jones offered to bring in couples to teach her students about marriage and child rearing, one pre-teen answered, "Oh no, we are not interested in the part about marriage.

Only the part about becoming good fathers. "Another boy spoke, according to Jones, 'as if the words left a nasty taste in his mouth: "Marriage is for white people.

"Now where would he come up with an idea like that? Set aside the shock factor in this child’s statement for a moment so we can look at how such an attitude would be groomed, and the bottom line is this: kids' attitudes are shaped by the culture they live in, by the things they see adults doing or not doing.In other words, what children are learning about marriage today comes from their parents-- both married and single and their peer’s families.

In this case, the culture these boys were growing up in told them that African Americans don’t marry, only white people do. So what is it that our kids are learning today about the value of marriage? What’s the culture doing to shape the opinions and values of our children, from elementary school to college? Here are just a few of the culture’s contemporary messages: Marriage is unnecessary (See recent cohabitation rates.)

If you do get married someday, it’s easily disposed of. (See cheap divorce billboards.)Children don’t need a mom and dad who are married to one another. (See the increase in adults who choose to get pregnant out of wedlock.) The good news is that there’s plenty of evidence that we as humans like marriage, at least as an ideal.

Virtually every research report on the topic shows that more than 90 percent of people enter marriage expecting it to last a lifetime. The other good news is that, though marriage may be weakened, it will never be entirely lost because there is something in the human soul that longs for the transcendent commitment of marriage.We had a conversation with someone in a culture nearly identical to Joy Jones' but with dramatically different results that illustrate the very point I’m making that our kid’s expectations and understanding of marriage are shaped by us.

Michael Westbrook is an African-American pastor and youth worker who has spent the last 20-plus years working with kids in the inner city of Newark, New Jersey. Westbrook said that he has never heard any of the kids at their community center make a statement about marriage being for white people only, and he would be surprised if they did. Why? And where do these types of statements come from?"

First, I wonder what role models are around the young man," Westbrook said, "what examples are being put forth that would cause him to come up with a statement like that. If I had heard him say that, I would have asked, 'Is anyone in your family married?Do you have grandparents, aunts, uncle’s cousins who are happily married? What about neighbors or teachers?' "If they were one of the kids in our neighborhood, I would have said, “You know that’s not true. Look at Maria and me. We’ve been married for more than 20 years.”

Which brings us to the key to unraveling this conundrum.Perhaps Westbrook has never heard a kid say, "Marriage is for white people’s because they have seen his example and that of other positive role models around them. And Westbrook is all about the example, the role model - living something out in order to teach it."

If we want kids to learn about marriage, we’ll have respected business leaders come in and talk to the kids about their lives. We’ve had a sound system engineer and a plastic surgeon come in recently and tell the kids what it takes to reach their goals.Along the way, they’ll talk about marriage and what it takes to succeed in their private lives as well as in business."

Westbrook said he and his wife constantly have kids in their home as a way of showing what a healthy, loving marriage looks like."We’ll even take kids to my board chairman’s house for dinner or other functions so they can see positive role models of marriage and parenting in the African-American community," Westbrook said.

Comparing these two stories from Washington, D.C., and Newark, New Jersey, shows that in an almost identical demographic, children’s views can differ dramatically based on the behavior of the adults around them.Take a minute as you read this to think about the messages you send to your kids or the kids around you about marriage. And realize that you are adding important information to their storehouse of knowledge about the way adults view this sacred union.

For the parents whose experiences have been negative in marriage, it would be wise to think more about what you long for in marriage than to dwell on the negatives of the past.Dare to dream big for your kids, then communicate your vision to them. Delivering bitter, tainted messages on the woes of marriage can negatively shape a child’s views of marriage, perhaps even contributing to future marital failure. In the absence of a healthy marriage to emulate, language that highly esteems marriage can still benefit a child.

What about single parents? Obviously, single parents can’t model marriage themselves in their singleness.But they can put their kids in situations where it’s modeled for them. In other words, follow Werstbrook’s example and find situations with happily married couples who can model mutual respect and commitment for one another.

In Michael Westbrook’s neighborhood, he and Maria may be the exceptions to the rule’s but they stand out by how they live their lives, by the deliberateness of placing positive examples before young people.

It’s why Westbrook isn’t hearing, “Marriage is for white people.” Georgia Family Council is a non-profit organization that works to impact communities, shape laws and influence culture in Georgia to strengthen marriage and the family.

Email ThisBlogThis!Share to TwitterShare to FacebookShare to Pinterest
Update by Cathy Horling on Rudy Seger:

"He is wearing a nitroglycerine patch, so his heart has stabilized, but more tests will be done today to try to determine the problem with his heart; one of his kidneys is functioning very poorly, and the doctors are extremely concerned about it; and his hemoglobin count dropped significantly and he has been receiving blood transfusions.

So far, there are no signs of internal bleeding and tests are being done to try to find out why thishappened. Please lift up my aunt also; this is very difficult for her as well.

I can't thank you enough for your faithfulness and prayers! My uncle said to thank everyone; he truly appreciates all of your prayers as we trust the Lord to heal him. God bless, Cathy"
at June 06, 2006 No comments:

Planned Parenthood, the nation's largest abortion business, made nearly $900 million last year, according to its most recent annual report. The report showed the pro-abortion group made its second-highest profit ever and set new records for the number of abortions it did and the lowest rate of adoption referrals compared to abortions.

According to its records, Planned Parenthood had a record income of $882 million dollars and a profit of $63 million, the second highest it has ever recorded.

The report also shows Planned Parenthood did more abortions in a single year, 255,015, than ever before.

It also set a new low for the number of women it referred for adoption compared to the number of abortions it performed. Planned Parenthood's annual report shows it did 180 abortions for every one woman it sent to an adoption agency.

Jim Sedlak, the director of STOPP International, a Planned Parenthood watchdog group, compiled the data from the reports. He said he was surprised the abortion business continued to ask for state and federal taxpayer dollars despite receiving record income.

"Planned Parenthood must assume that elected officials can't read a simple annual report," Sedlak said. "While Planned Parenthood is begging for increased government funding, it's also admitting that it racked up record operating profits in its most recent fiscal year."

Sedlak also pointed out that Planned Parenthood set a record last year for the highest amount of taxpayer funding it received in a single year -- with a total of $272.7 million in government grants and contracts.

Since 1987, Planned Parenthood has now received a total of $3.9 billion in taxpayers' money, Sedlak explained.

"During that time it has surgically aborted more than 3.8 million babies in the womb," he said. "Just think of all the positive programs that could have benefited from our tax dollars had they not been wasted on such destructive efforts."

"It is absolutely incredible that, in these days of natural disasters and homeland security threats, our federal, state and local governments would fund this controversial organization to the tune of nearly $4 billion," said Sedlak.

"Why is our government so quick to finance such ruthless attacks on our own innocent children?" Sedlak concluded.

From our wonderful CPA, Cathy Horling:

Hello again,I have another prayer request - this time for my nephews (Joe's grandsons:Mike, age 14 and Tommy, age 10). They are both having a very rough time -not being able to sleep at night, not being able to concentrate in school,and sometimes having to be taken out of school because they are too upset tostay there, worrying that someone else will have a heart attack or get cancer, and in general wondering why this had to happen.

There are no easy answers, but the Holy Spirit is the Great Comforter and He can reach them the way no one else can. Please pray that they feel the peace and comfort that only the Lord can give. Thank you so much, again, for your faithfulness and prayers.

Hello again,Please continue to pray for my uncle - he was coming along wonderfully through Saturday but yesterday he suffered a setback. He's having some problems with his heart; it could be a narrowing of the arteries; tests arestill being run. We know that the Great Physician hears our prayers and hasHis healing hand on Uncle Rudy. I thank you so much for your continued intercession. God bless, Cathy
at June 05, 2006 No comments: