"One of our volunteers, Vera Porter, tragically lost her grandson, Erik Porter Reed this past Friday, May 6th. Erik was only 25 years old. He was shot leaving his girlfriends home at the Mrvalag Manor(Elizabeth, NJ)at about 1:50 a.m.

Please pray for the family. Pray for the Comforter to bring peace and comfort to them during this most painful loss.

Below is the news story:

Police searching for Elizabeth man's killer. Police are trying to find out who shot an Elizabeth man in the back of his head and why, authorities said today.

Eric Justin Porter Reed, 25, of Summer Street, was found lying along the curb of Clarkson Avenue shortly before 2 a.m., said Lt. Gary Lewis. Reed was bleeding profusely from the back of his head and died minutes later, at about 2:09 a.m., Lewis said.

The incident happened in front of building 27-29 Mravlag Manor, a public housing complex on Clarkson Avenue. Witnesses said several shots were fired, and police found some shell casings at the scene, Lewis said. The motive was still unknown as of today, and there was no indication that the victim knew his killer, Lewis said.

Police are looking for a short black male, possibly with dread locks, wearing a gray, hooded sweatshirt and jeans.

While Reed was shot in the back of the head, it was not done execution style, Lewis said. 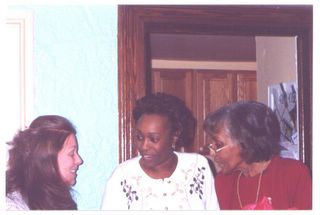 Vera Porter) far right, with Joan Vitale and Michele Clarke at Gateway's 2003 Christmas party
at May 12, 2005 No comments: 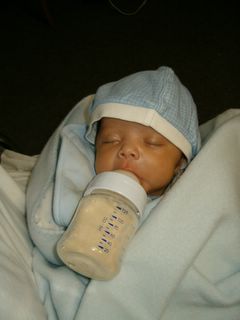 Please pray for 3-week old Eric, who is undergoing skin grafts on his leg. Right after being delivered at University Hospital in Newark, Eric was burned in his leg by a bad mixture of IV. His mom came to Gateway tonight.

WOULD YOU PLEASE PRAY FOR MY BROTHER-IN LAW'S FRIEND, PAUL SOLOMINI? HE HAS
BEEN ILL FOR YEARS; NOW HIS KIDNEYS ARE FAILING AND HE'S HAVING ALL KINDS OF
HEART TROUBLE. THE DOCTORS HAVE SAID IT'S ONLY A MATTER OF TIME AND THERE'S
NOTHING THAT CAN BE DONE FOR HIM MEDICALLY.

WE ALL KNOW THAT THE GREAT PHYSICIAN CAN DO ANYTHING. THANK YOU FOR YOUR
PRAYERS!

Kevin felt pain in his lower abdomen this weekend and last night. Your prayers are appreciated and still needed. The last blood work that was done indicated that his liver enzymes are still abnormal.

Last week, I called the doctor, a pediatric GI specialist who saw Kevin at Hurley, and left a message. The her office called back the other day and gave the date of June 13th as a day for an appointment. I, after sensing Kevin's discomfort, asked if there was an earlier date available. We now have an appointment for May 9th at 9:00 in the morning. It's a slow but neccessary process. Kevin's health and future are worth it!

Again, thank you for your prayers. You will be updated accordingly.