'Whose Life Is It Anyway?' .. a brief history of the "Right to Die" movement 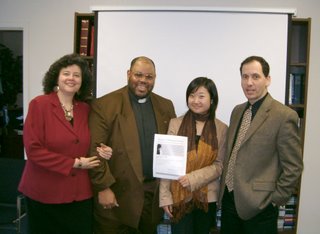 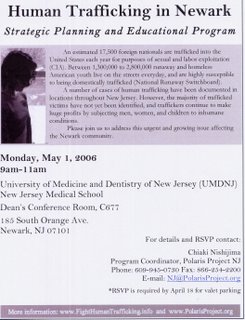 Here is the promised update on Lisa. See the story below (also on our Blog):

"My client we named Lisa, whom we were praying for concerning her taking the
methotrexate and then wanting to change her mind, she was still very undecided
even after our counsel and seeing her unborn 7 week old baby.
After her appointment at Dr. A's office last Thursday she made a choice to continue
with the abortion. I understand from her boyfriend that the mill called her, and she
had pressures as well from those she lives with. Such a tragic decision.

The one good decision she made was for Christ. The good news is that she called
Dr. A's office today. After the abortion she felt horrible, both physically and emotionally.
She received Christ at Dr. A's office .

Thankfully, she went back to Dr. A and not the abortionist.
Thank you all for your prayers. Love, Joan"
at March 27, 2006 No comments:

"Thank you for your prayers, please continue. Our client, Lisa, is still undecided and has circumstances that she really wasn't open that much to share.

She came to Gateway; unfortunately she wasn't very talkative but she did listen. The gospel was shared ... client did go to see Dr. A.

The doctor, of course,cannot tell her that she is going to have a perfect baby but he did show her the 7 week old unborn baby's heartbeat.

I will keep in touch with the young man who referred Lisa to us.. Please be praying for her salvation. I will also like to have her back again here at Gateway in two weeks or so for another ultrasound and further opportunity to share Christ. Joan"
at March 23, 2006 No comments:

Here's a prayer request from Joan at Gateway - Elizabeth:


"Asking for special prayer concerning the phone call I received from a male friend of a 31 year old woman who had gone to the abortion clinic at 700 No. Broad Street approximately one week ago at which time she took the first process of the abortion pill which is methotrexate.

Her male friend called Gateway seeking our help because this woman does not want to continue with the abortion.He is a Christian.

Tomorrow (Thursday) this man and woman {let's call her Lisa}will be here in Elizabeth.

Pray for her salvation .. and pray for her appointment which will immediately follow, with Dr. Arrunategui, our pro-lifeChristian OBGYN.Glory to God. I am believing by faith that our prayers will be answered. Joan"

Would you please continue to pray for my uncle? He was supposed to have his surgery today, but his white blood count is dangerously low.

First, the good news: the growth was biopsied yesterday while thecolonoscopy was done, and the results are that it is BENIGN! It is actuallythe size of a lemon, not a golf ball. The other news is that the surgery has been postponed.

Uncle Rudy's white blood count isn't where the doctors wantit to be to fight off any infections, so they will give him a blood transfusion and keep him in the hospital for 2 more days, send him home fora week to build him up, and then he'll go back for the operation.

More good news is that his sugar level has been great without diabetes medication while he's been hospitalized, so he really has to concentrate on a properdiet.

His kidneys are only working at 40% of normal capacity because of the diabetes, so we need to pray about that, too.Please continue to lift him up in prayer and between Dad and I, we will keep everyone updated.

(Planned Parenthood, which operates the state's only abortion clinic, in Sioux Falls, has pledged to challenge the measure in court)

** Planned Parenthood, Margatret Sanger and 9 things you should know!

(1) How could anyone claim to be proud of an organization when history records that its founder wrote of the necessity of "the extermination of 'human weeds'...the 'cessation of charity'...the segregation of 'morons, misfits, and the maladjusted' and...the sterilization of 'genetically inferior races?'" Killer Angel, George Grant, Reformer Press, p. 105, available from Radio Liberty, P.O. Box 13, Santa Cruz, CA, 95063.

(2) During the 1930s Margaret Sanger published The Birth Control Review, in which she openly supported Nazi Germany's "infanticide program" in the 1930s, and publicly championed Adolf Hitler's goal of Aryan white supremacy. Prior to World War II she commissioned Nazi Ernst Rudin, director of the dreaded German medical experimentation programs, to serve as an advisor to her organization.

(3) In Killer Angel, George Grant chronicled the life and writings of Margaret Sanger, including her plans for genetically engineering the human race. Margaret Sanger's The Pivot of Civilization called for "the elimination of human weeds," and the "cessation of charity" because it prolonged the lives of the unfit. She called for the segregation of the unfit and prohibiting them to reproduce.

(4) In 1939, Margaret Sanger organized the Negro Project, designed to eliminate members of what she believed to be an "inferior race." She justified her proposal because "the masses of Negroes... particularly in the South, still breed carelessly and disastrously, with the result that the increase among Negroes, even more than among whites, is from that portion of the population least intelligent and fit..." Woman's Body, Woman's Right, Linda Gordon, Penguin Press, New York, p. 332

(5) She then went on to reveal that she intended to "hire three or four colored ministers to travel to various black enclaves to propagandize for birth control...The most successful educational approach to the Negro is through a religious appeal. We do not want word to go out that we want to exterminate the Negro population, and the minister is the man who can straighten out that idea if it ever occurs to any of their more rebellious members."Killer Angel, p. 74: see also Woman's Body, Woman's Right, pp. 229-334.

(6) As Margaret Sanger's organization grew, she wrote of the necessity of targeting religious groups for destruction as well, believing that the "dysgenic races" should include "fundamentalists and Catholics" in addition to "blacks, Hispanics, [and] American Indians."5 Woman's Body, Woman's Right, pp.229-334;

(7) As the years passed, Sanger became increasingly obsessed with occult beliefs and hostile to Christianity and the American precept of individual freedom. Her distaste for America is evident in her writings: "Birth control appeals to the advanced radical because it is calculated to undermine the authority of the Christian churches. I look forward to seeing humanity free someday of the tyranny of Christianity no less than Capitalism." Killer Angel, p. 104.

(8) Those vast, complex, interrelated organizations aiming to control and to diminish the spread of misery and destitution and all the menacing evils that spring out of this sinisterly fertile soil, are the surest sign that our civilization has bred, is breeding and is perpetuating constantly increasing numbers of defectives, delinquents and dependents. My criticism, therefore, is not directed at the ``failure'' of philanthropy, but rather at its success. (The Pivot of Civilization)

(9) Our tax money finances Planned Parenthood, an organization founded by Margaret Sanger. In Planned Parenthood's 1985 Annual Report, its leaders proclaimed that they were, "Proud of our past, and planning for our future." Killer Angel, George Grant, Reformer Press, p. 105, available from Radio Liberty, P.O. Box 13, Santa Cruz, CA, 95063.

This is not a column about abortion, per se. I've written plenty of those in the past and will write more in the future. This is, however, a column about a "non-profit," tax-exempt corporation that rakes in more than a quarter-billion dollars in U.S. taxpayer money every year and boasts of being the world's largest "abortion provider." It's called Planned Parenthood.

It is a disgusting, evil organization that somehow operates under its own set of rules � unaccountable in any way, shape or form to the rules and regulations governing other so-called "non-profits." In fact, Planned Parenthood makes plenty of profits.

It made more than $35 million in what it euphemistically calls its "surplus" in the 2003-2004 fiscal year, according to a dynamite new book by Kelly Hollowell titled "Struggling For Life: How Your Tax Dollars and Twisted Science Target the Unborn."

In fact, in the last seven years alone, Planned Parenthood has earned profits � or built a surplus � of more than $350 million. In that time period, it has been given government grants of nearly $1.5 billion. That's what I call subsidizing the abortion industry. While, technically speaking, no U.S. taxpayer dollars are specifically allocated for abortions, Planned Parenthood performed some 1.4 million of them in that same time period.

But as Hollowell points out, it really is a distinction without a difference. "Would the U.S. government have financed the 'good works' (education, building bridges, etc.) of the Nazi regime � so long as the Nazis promised not to use the funds for purposes of destroying human life in its concentration camps?" she asks. "Common sense dictates the answer � 'NO!'

I mean even if the Nazis did not use the tax dollars directly for an evil like genocide, such funding would free up their other finances, allowing them to invest in their openly evil agenda. Likewise, we should not support Planned Parenthood with our tax dollars." It's a big shell game. Money is fungible. When Planned Parenthood can spend your money on maintaining its image as a "charity," it is free to spend other funds on killing babies.

In fact, as Hollowell points out, they totaled more than all of those programs combined. This money has allowed PP to spend $193 million influencing public policy over the last seven years. To put this in perspective, that's more money than the Federal Elections Commission allotted to either George W. Bush or John Kerry in 2004.

PP is one of the most powerful lobbying organizations in America... How do you like the U.S. Senate being manipulated with your money? How do you like enriching people who kill babies for a living, who sexualize your children in schools, who hand out bad condoms to kids to stimulate their abortion business, who use the courts to ram their warped worldview down your throats through judicial activism? If you like it, sit back and enjoy.

Planned Parenthood is recognized by the U.S. Government as a tax-exempt, non-profit organization, but IRS regulations do allow it to have "income in excess of expenditures" as long as the excess income is not distributed to individuals or organizations that are not also charities. "But," Sedlak maintains, "Planned Parenthood's operations appear to go far beyond the occasional small profit envisioned by the IRS regulations.

Planned Parenthood's data reveals that, at the same time it was making all these profits, it received $1.6 billion in taxpayer funds."

Email ThisBlogThis!Share to TwitterShare to FacebookShare to Pinterest
Please pray!

Would you please pray for my uncle, Rudy Seger? He was hospitalized on Saturday with a blockage in his intestines, and is scheduled to have surgery to remove it either tomorrow or Wednesday. He is a diabetic and is having some problems with his kidneys also.